DEVOTION the film by Dolce and Gabbana dedicated to Sicily

Devotion the film by Dolce and Gabbana .

Devotion toward a wonderful land: Sicily 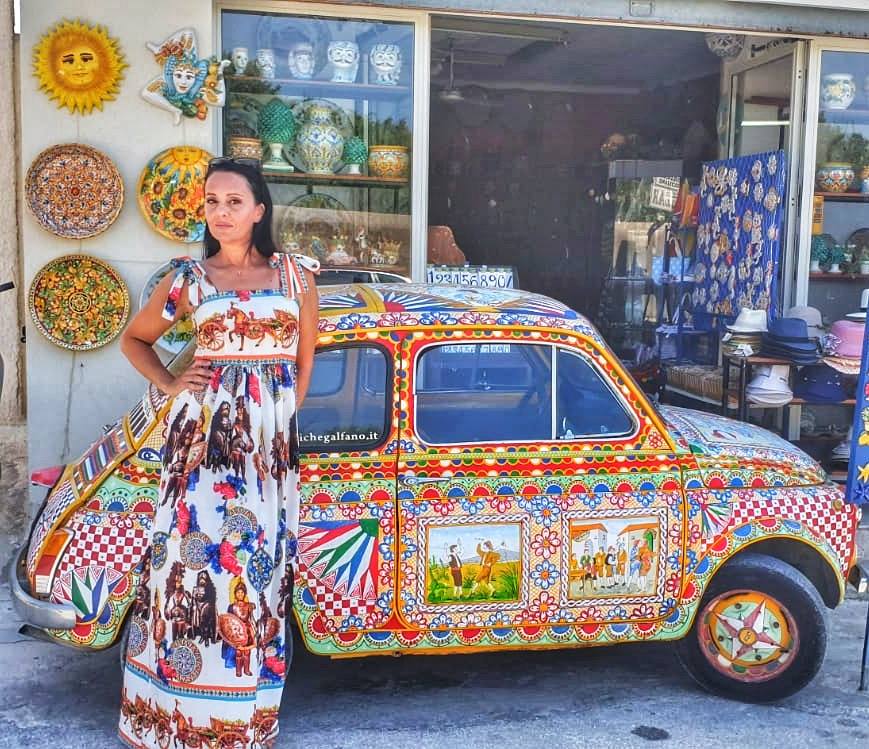 Sicily is an embrace of colors

As you know, I created this blog as a project to share my tremendous passion ,enthusiasm and knowledge for Sicily.
To “inject” a little magic of my land to my readers.
A recounted Sicily. Relational. A Sicily full of real experiences.

Certainly, I created this blog for people that are looking for the most intriguous things and charming places. For people that want to discover the soul of a place .
By writing, I share my experiences and encourage travelers to recreate them during their holiday.

Perhaps the reason for my travels around the world was nothing more than a search for landscapes, which functioned as powerful reminders. (Giovanni Comisso)

So you wonder why I decided to write about Devotion the film by Dolce and Gabbana , considering that it is not an experience that can be repeated?

There are many reasons that led me to write about this “event”.
1) Domenico Dolce is from Polizzi Generosa. In my blog presentation I told you about my adolescence spent in Polizzi Generosa. My parents are originally from there.
A charming, quiet village (too quiet alas) but where nothing incredibly exciting happened. For this reason I moved to Cefalù.
If you have time , later you can read the article “Who I’m” to know more about me. Link below

Despite this, Polizzi is a village  rich in history, culture, traditions and great personalities. It is no coincidence that it was the birthplace of: Cardinal Mariano Rampolla del Tindaro  who was about to become Pope, the American film director Martin Scorzese, the writer Giuseppe Antonio Borgese. And also, the  actor Vincent Schiavelli and not least Domenico Dolce.

The truth of my move to Cefalù is also another: I was ambitious and in Polizzi there was no possibility of growth. Even though, I have to say, it is a place with a potential and which is always part of me.
In a future article I will write about Polizzi and the experiences to live during a nice holiday here. 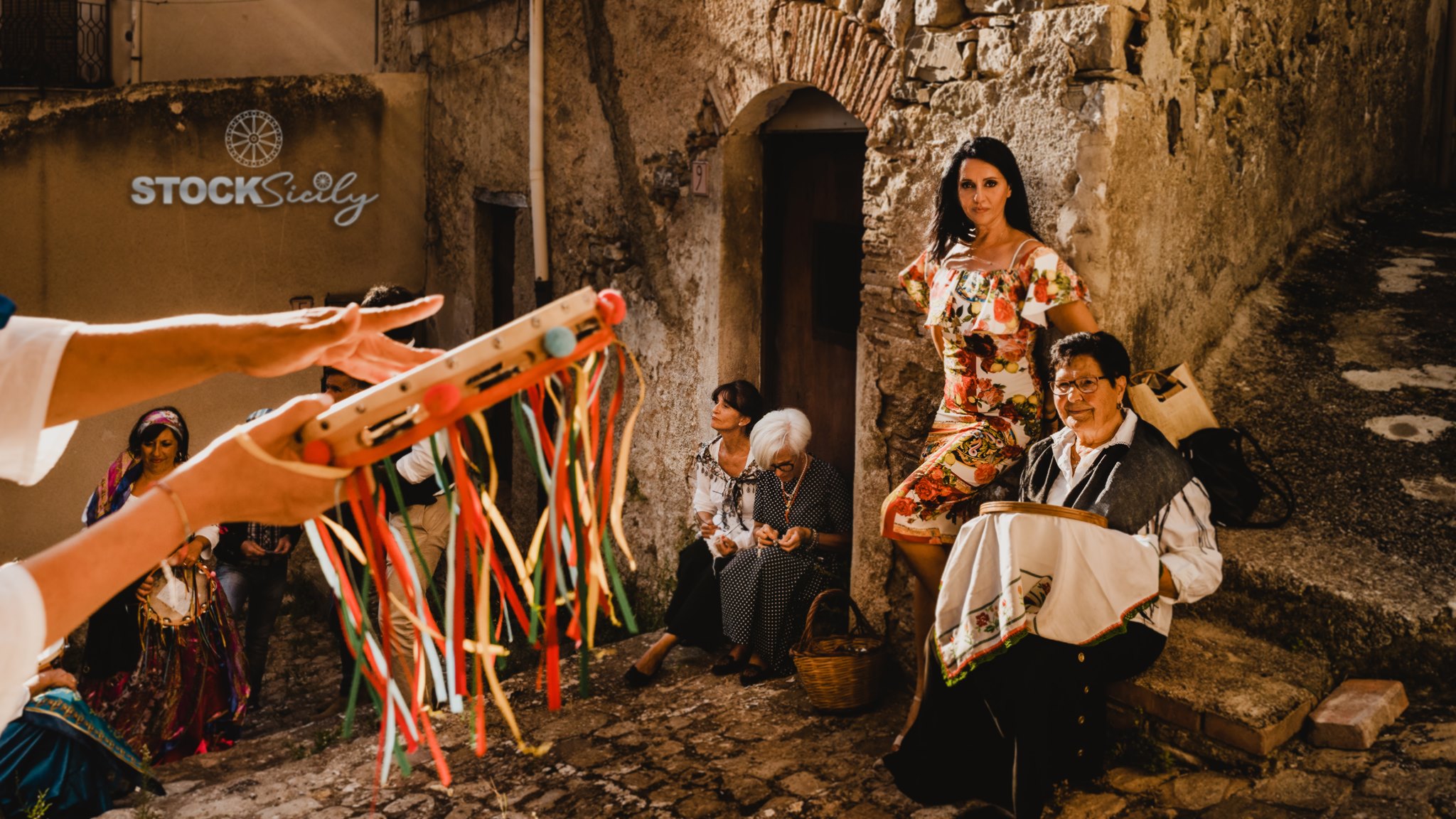 Traditions are not the worship of ashes, but the preservation of fire”. (Gustav Mahler)

2) Dolce and Gabbana’s devotion to Sicily is the same as I have for this magnificent land. The same  devotion I have for  my work and the beauty of Italy.

3) I saw the preview of Devotion the film by Dolce and Gabbana in Taormina,  and I was crossed by a thousand emotions. And in my blog I told you that I just want to dig deeper into what is that turns me on, during an holiday or an experience. When I visit and write I visualise myself having the same impact on my followers. Because words have vibrations and can inspire people. And Devotion is also this: inspiration.

Here are the reasons that pushed me to write about Devotion the film by  Dolce and Gabbana. 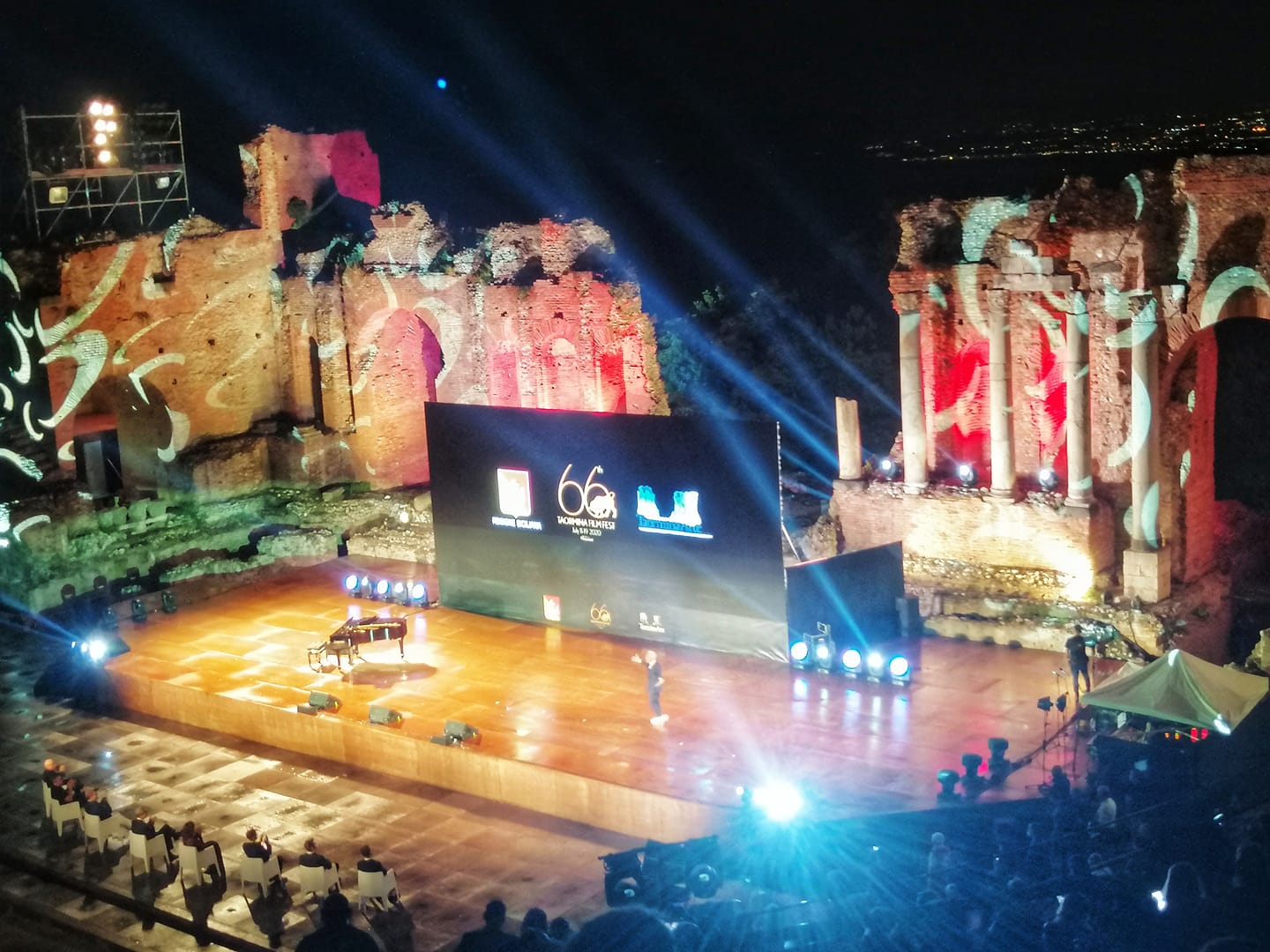 Domenico Dolce and Stefano Gabbana choose the Ancient Theatre of Taormina to present the world their new film ‘Devotion by Dolce and Gabbana’.

BUT WHAT IS DEVOTION ?

Firstly
DEVOTION the film by Dolce and Gabbana is directed by Giuseppe Tornatore (his mark is recognizable from the very first scenes). It tells the story of Domenico Dolce and Stefano Gabbana’s infinite love for the beauty and culture of Sicily. Most of the film is set around the streets of Palermo ( crossroads of cultures and several times inspiration for D&G creations) .
It gives us a glimpse of the journey for the creation of a dress , from inspiration to creation.
It tells Domenico Dolce and Stefano Gabbana’s infinite passion for their work

DEVOTION is a path in which languages, stories, love, passion interlace , and dreams come true, albeit with many sacrifices.

DEVOTION is the history of these 2 crazy geniuses’s world , who are the fashion designer of SICILY. But also fashion designer of the Mediterranean tradition, of southern Italy, of the Sicilian woman of the past , who they made glamorous and sensual.

DEVOTION is the story of a daily life entirely dedicated to fashion and beauty. Human beauty but also and above all the beauty of this splendid island that lives in every their single creation.

DEVOTION it is an exaltation of the true values of life, which you find strongly rooted in this brand. Values such as: tradition, warmth of a family, love, handmade work, creativity and the story of emotions. Because each of their creations is imbued with feelings, stories and soul. The controversial but beautiful soul of this island.

Furthermore
DEVOTION is the testimony of the intense and profound relationship that the 2 designers have with this land. A land with great potential but where the conviction that dreams can be realized is lacking.

What does Sicily represent for Dolce and Gabbana?

Sicily is an inexhaustible source for the creativity of Dolce and Gabbana. Their inspirational muse. Basin of suggestions. Place of their heart. Place from which many of their projects start.
Sicily is the beginning of everything for them. In each creation we find a piece of Sicily: the friezes of a church, the scenes of the paladins, the magnificent paintings of the carts, the majolica, the Sicilian colors.
Their creations are the splendid story of this magnificent and controversial land. Their clothes are emotions.
They bring to our mind the memory of ancient traditions, of laid tables, of people’s passion, of wonderful views, of colors and of history.
Creations that make the Sicilian woman of the past (who loved to dress in lace and petticoats, black stockings and shawls), glamorous.
Works of art ! These are their creations. Works that tell of the infinite love and devotion for this beautiful land. 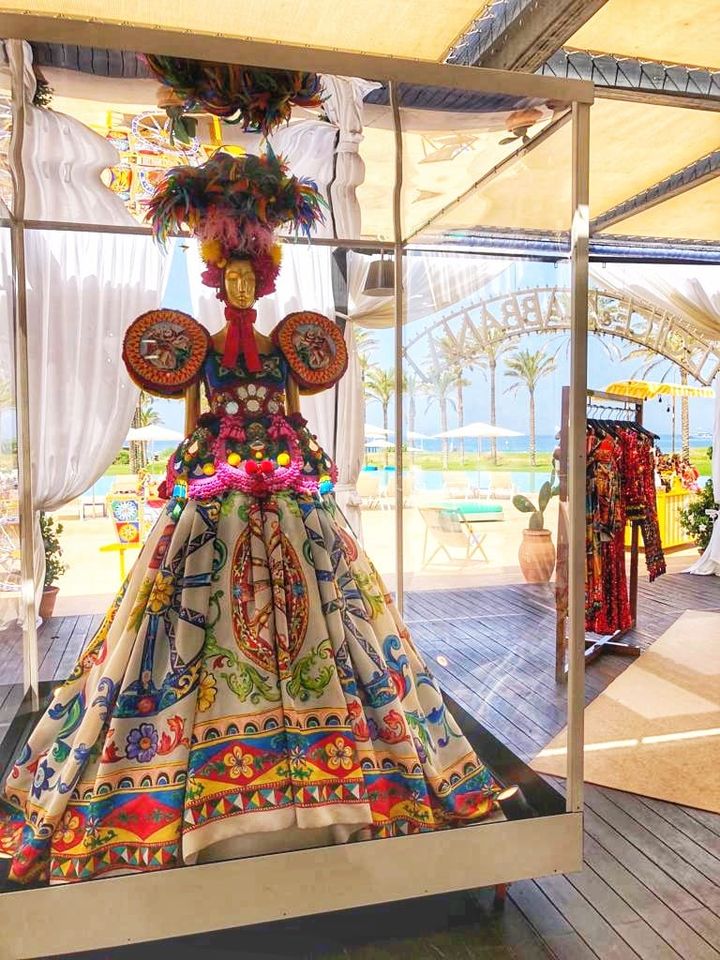 No matter how old you are, you never stop dreaming. So why should you when it comes to clothes? (Stefano Gabbana)

Sicily for me:  an eternal love

Sicily is the land that I am madly in love with,  and that in a different field (tourism),  is my muse. It is a source of creativity for the design of experiential and unique itineraries and events that are imbued with my Sicilian soul.
Impossible not to love Sicily, a wonderful land, the cradle of loves and artists. A land that has the charm of a natural landscape made of water and sand. A land suspended between nature, history, tradition and good food. 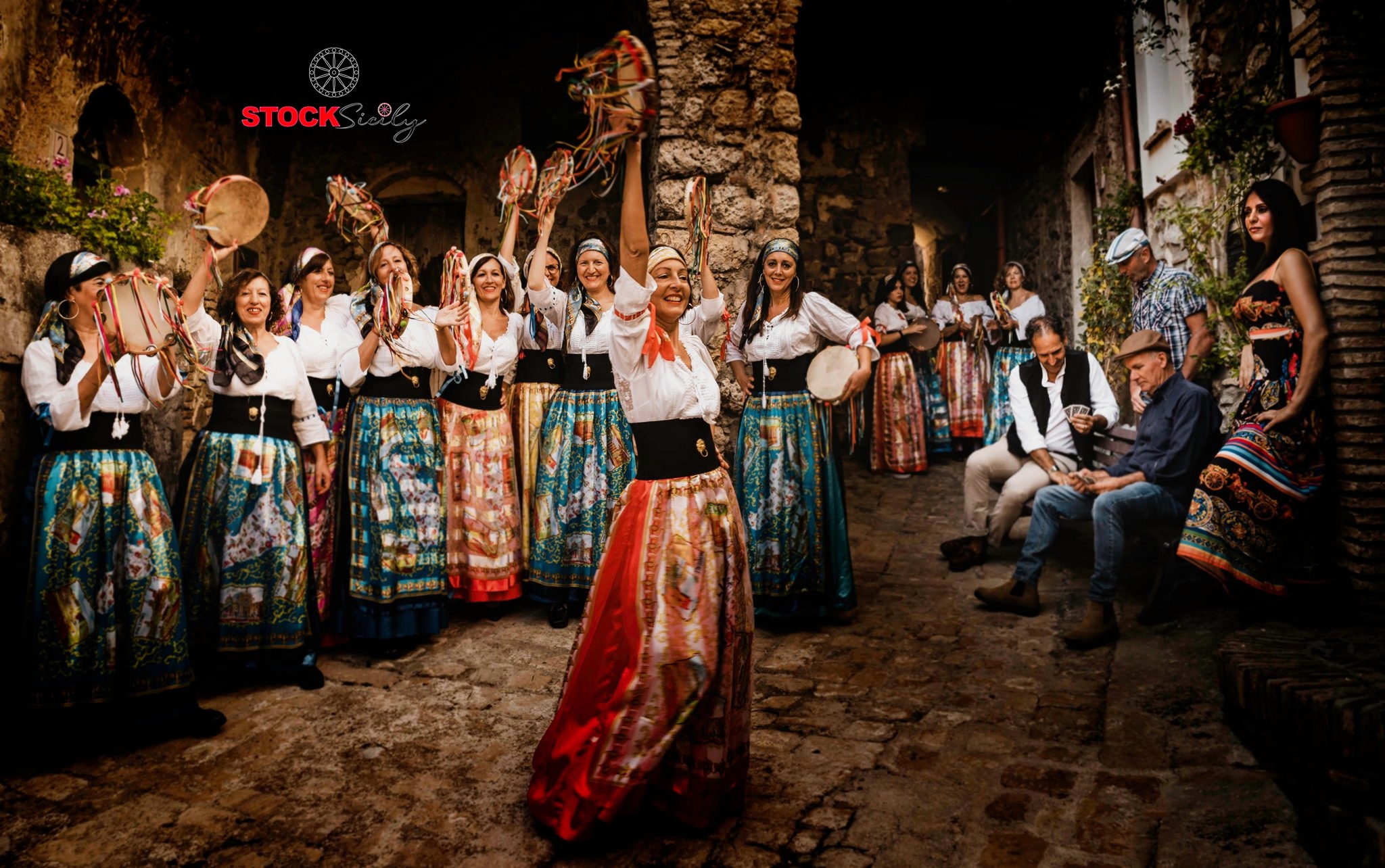 Popular music is not so much an art as it is a process, an attitude and a way of life; its distinguishing characteristics lie not in the songs themselves, but in the relationships of those songs with a popular culture .  Photo by Angelo Chiello Master Photographers

Sicily: where the blue of the sea stands out, the reflections of the sun on the water. Island with the wonderful colors of nature, the views of incomparable beauty, the ancient traditions.
Sicily, a place where the sand is as white as the smiles of the locals. Where time stands still and it’s hot almost all year round. And where the sun’s rays await you to cradle you in his arms.
Land that once visited can never be forgotten.
In other words, that’s why I love her so much and I do everything to spread the “cult of Sicily” and make the whole world love her.

Because there is nothing more beautiful than the way the sea tries to kiss the beach every time, no matter how many times it is sent away. ” -Sarah Kay.

Devotion is inspiration
But let’s back to talk about Devotion the film by Dolce and Gabbana  and what excited me. But above all I want to highlight what it inspired me.
This docufilm highlights a path furrowed by joys, second thoughts and brilliant intuitions. But also bonds with one’s own identity (made up of simple things like tomato sauce, fried aubergines, family lunches), discipline and patience.
Because as Domenico Dolce says: “it is a continuous work of confirming, affirming, denying and starting over”
But it also highlights non-giving up and passion. A lot of passion for what you love.
Because with sacrifices, love and passion, you risk becoming famous, as Domenico Dolce says.
After all, being successful is not a complicated thing. Just dedicate your life totally to talent. 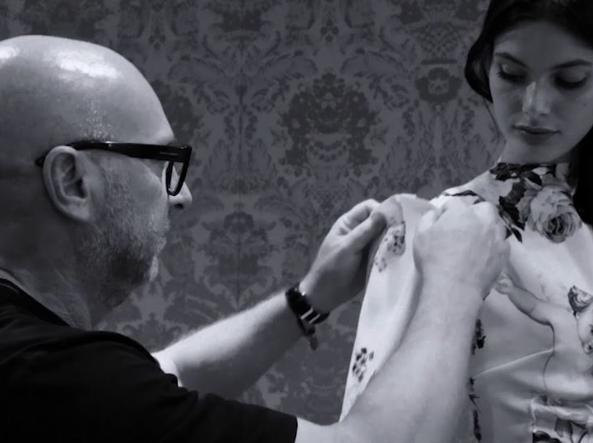 The film Devotion and me
I saw myself in many things in Devotion the film by Dolce and Gabbana. And I told myself that the road I have been following for 24 years is the right one. It is made up of sacrifices, tears, fatigue but also of joys, satisfactions, energy. And so much love for my work: tourism.
But above all love for my beautiful Sicily.
I have a mission and an ambition, to bring the beauty of this island in the world. And I will not give up until I succeed in this task.

Never stop dreaming
I want to convey this thought to all of my followers: never stop chasing your dreams. Never stop believing in yourself. Don’t give up in the face of life’s difficulties. Work to bring out your creativity and be successful. Be devoted to what you love and what makes you feel good. And rest assured that even if you don’t become famous, you will still feel satisfied with what you have accomplished.
Believe in yourself . Stefano Gabbana says “Dreams can always come true, you need a lot of energy and determination and a little luck”.
And if you will not realize them, it is the same. Because you learned something. Mandela used to say “I never lose. Either I win or I learn “.
I have learned to never give up because when “you think it’s over, that’s when the climb begins. What a fantastic story life is ”- Antonello Venditti 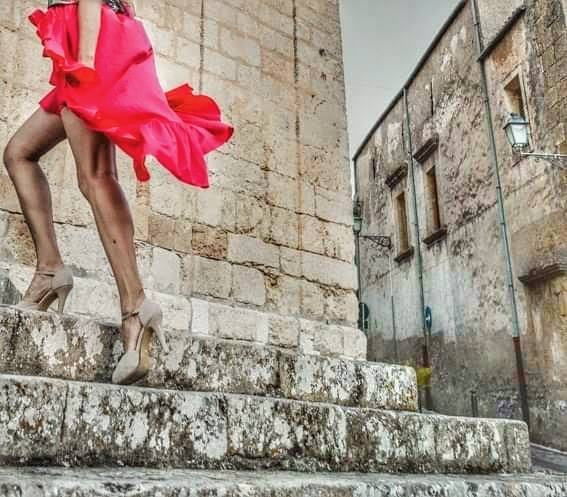 In conclusion, with Devotion , I wait for you in Sicily to make you live unforgettable experiences.
Angela

About the Author: Angela Macaluso

I’m Angela and I was born and bred some years in Novara ( Piemonte). Then my parents decided to get back to Sicily and I grew up on a small mountain village in the Madonie park : Polizzi Generosa . Nothing incredibly exciting happened there and for this reason I decided to move in an other city where I live happily: Cefalù . A beautiful medieval town, included in the World Heritage List in 2015 I was a smart girl in school and I loved to learn . I like music and books , animals , dance and most of all to know people and get in touch with the real soul of a place. I also love photography , gelato and writing . And naturally I like to travel and everything it’s in between.